This activity has been great for encouraging Bubble's story telling and language skills. You dont have to use objects, you could also use pictures or a mixture of both.

* large bag (thick enough not to be see through)
* various objects for telling a story - it can be anything really! 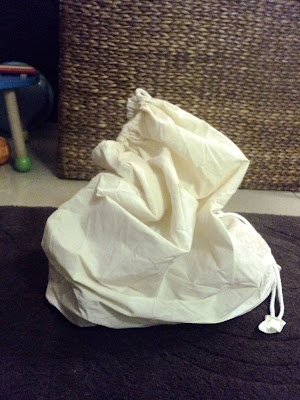 The idea is very simple - place your objects in to the 'story telling bag' and take it in turns to take things out one at a time. Whatever you draw from the bag has to be incorporated into the story, making it up as you go along. At first your child could watch while you draw things from the bag and create a story to go with them, before encouraging them to join in.
The stories can be silly and not make sense in the slightest, it will still be encouraging language and imagination.
You could also just lay the items on the ground and take turns to choose whichever item you like, rather than drawing them from the bag randomly. 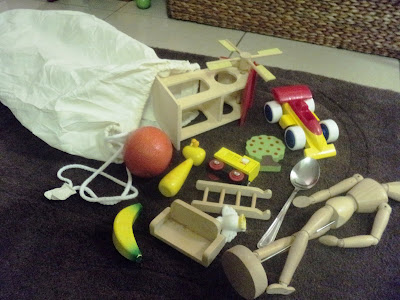 One of our story bags from this afternoon.
Try using a real variety of objects and include a few categories like food, transport, places etc...
In our story a man climbed the apple tree with a ladder to catch an apple in a spoon. Then the windmill blew him into the sky and he dropped it, but he found an orange in his pocket. Luckily he landed on a lounge and didnt squash his orange. A giraffe caught the apple and ate it all up! Then the giraffe caught a train to the circus because he wanted a job and he stopped to ask a bird where the painting things were. The bird didn't know but gave the giraffe his racing car since he couldn't reach the pedals, and the giraffe gave the bird a banana to say 'thankyou'.
Utter nonsense but so much fun :-D