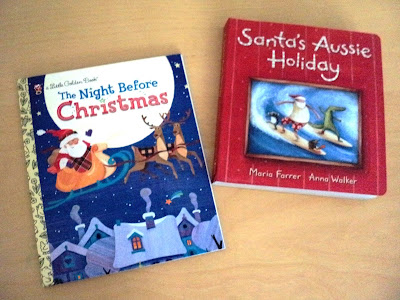 Our Day 15 activity on our Count Down calendar was for each of the girls to choose a Christmas book, which we did on Wednesday. Bubble chose the Little Golden Book version of 'The Night Before Christmas' and Squeak chose 'Santa's Aussie Holiday' (by Maria Farrer and Anna Walker).
Both books were popular; not too long and really bright interesting pictures. Santa's Aussie Holiday was definitely the favourite though, we've read it so many times I almost have it memorised (no mean feat let me tell you, my memory is almost non existent!). The added bonus is that it mentions places that are very special to us which made it feel a bit personalised. The pictures were funny and the girls liked spotting different Australian animals in each one. The rhyming was also very well done, I have a big dislike for corny wording in rhyming books but this one was really entertaining!
The Little Golden Book version of 'The Night Before Christmas' kept Bubble's attention because of the pictures but Squeak wasn't quite as keen. The words are a bit 'old world' for the girls to understand, so maybe it's better for kids who are a little bit older. The subsequent few times that we read it I explained to Bubble what the unusual words meant, but of course Squeak wasn't about to listen to that :-D
Both books were also very well priced; Santa's Aussie Holiday was $14.95 and The Night Before Christmas was only $4.50 (I then saw it on Thursday at our local supermarket for $3, so check there first if you're after a copy!).
Posted by Caz at 1:19 PM