Both of our girls are into dinosaurs in a big way, so anything involving Tyrannosaurus Rex and play dough was always going to go down well.
This activity was one we did recently which they both enjoyed and also incorporated a lot of great fine motor development for Squeak, particularly her pen grip and drawing skills.
Plus, it was just plain fun. 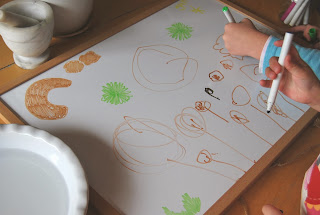 We laid our whiteboard down on the table and the girls got to work creating a dinosaur landscape, including a nest. 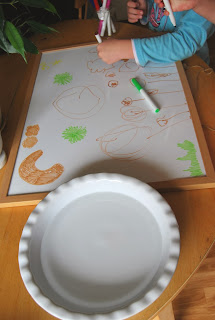 They wanted somewhere for the aquatic dinosaurs to swim so we added a pie dish with water in it to one side. 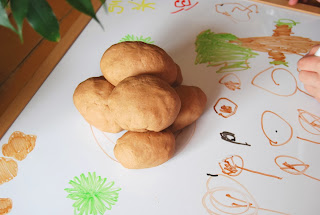 Once they were happy with their dinosaur world I gave them some 'dinosaur eggs'.
To make these I wrapped toy dinosaurs in play dough and then rolled the dough into an egg shape with the dinosaurs inside, ready to be hatched. 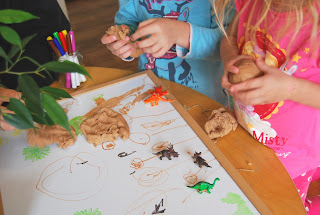 The girls had a lot of fun hatching their eggs, playing with them in the landscape they had drawn and also in the water. 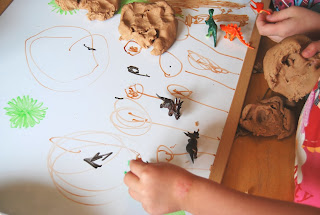 They made up stories and added to their whiteboard picture as they went. 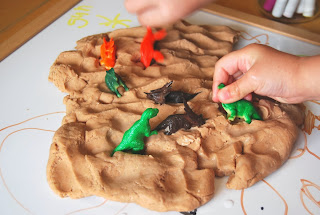 The hatched play dough eggs became a big mud pit for the dinosaurs to stomp around in and hide from the Tyrannosaurus Rex. 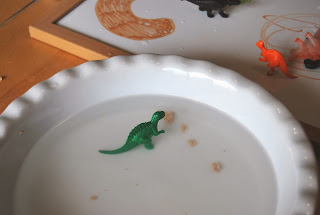 The 'dinosaur lake' got a work out too! 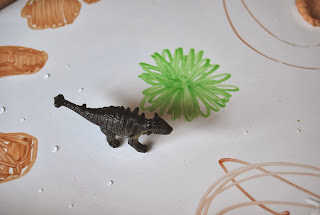