Our dollshouse dolls are in the same predicament we are - great place to live but no backyard! :-D I decided to make a playground for the girls to play with:

* toilet roll and paper towel tubes
* electrical tape (any strong tape will do)
* giant popsticks
* wool/string
*scissors
* sand
* empty mini pie pans (pattypans or a container lid would also work)
* mini flowerpots (empty film canisters, matchbox trays, small cups, jelly moulds, mini pattypans etc... would also work)
* cylinder shaped building block
* small cardboard tray (the one I used was from the packing in a box, but a shoebox with the sides cut down would work great. Shoe shops usually have a surplus of shoeboxes if you dont have any at home).
* blutac
* one of the cup sections from an empty egg carton 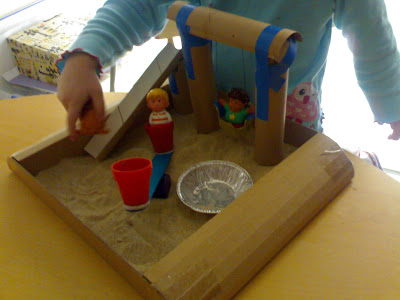 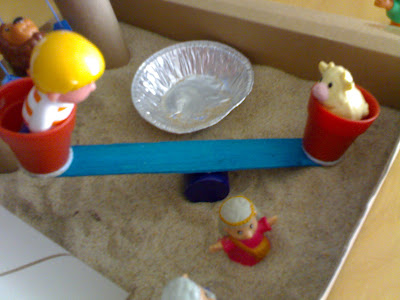 Seesaw : mini pots blutac'd to either end of a giant popstick, with a cylindrical building block stuck underneath. 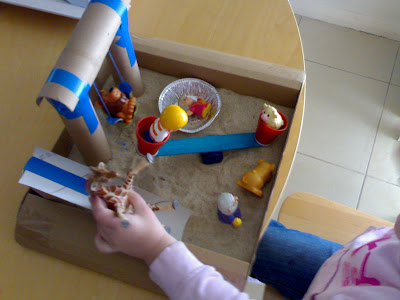 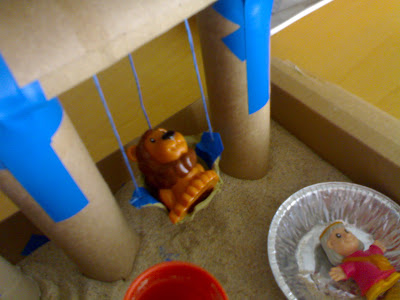 Swing: Two toilet rolls on either side, with one across the top. Just cut a small section from the underside at either end of the top roll so it sits on top of the upright tubes and can be taped on easier. Puncture holes in the middle of the top tube to attach the wool/string swing y threading it through. The swing section is a cup cut from an empty egg carton, but any kind of cup would do, even half a balloon would do the trick. 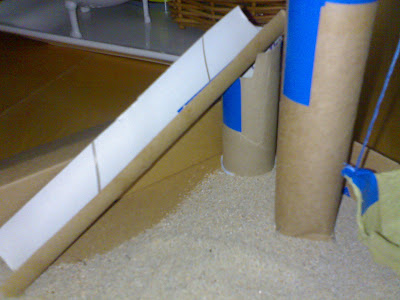 Slide: paper towel tube cut in half resting on top of a toilet roll with a small section cut from the front. Tape together. 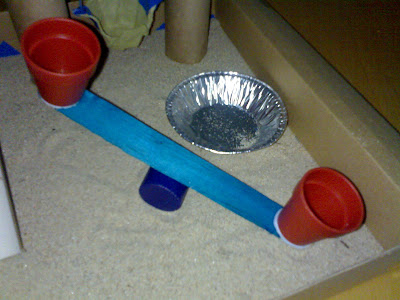 The pie pan I just blutac'd to the base of the tray before adding the sand. This can be filled with water to make a pond or swimming pool.
Posted by Caz at 11:37 PM