When my girls have grown out of a toy I like to either recycle or reuse it. Toys that can be donated we drop off at charity bins or stores, and ones that aren't really suitable for passing on we try to use for other things. One such unsuitable for donating item was this teething ring, so instead I cut one side of the band and it became a threading activity instead. I added them to Bubble's collection of threading beads and spools and she has been busy making 'jewels' with them ever since. 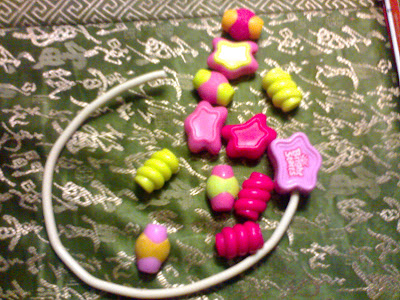