Front and Back - Speech Activity

This activity is taken directly from Bubble's speech therapy where we are working on joining words and increasing her sentence structure.
We use the instructions "at the front" and "at the back" because our goal is to increase speech not teach the concept of prepositions but the wording can easily be changed to "in front" and "behind" to teach these instead.
You could also create boxes to the sides to teach left and right, beside or next to. Make a row of boxes to teach first, second/middle and last.

* electrical tape
(masking or painters tape would work great too, I just couldn't find any)
* scissors
* small objects
* toy with a clear front and back
* paper and pen/marker 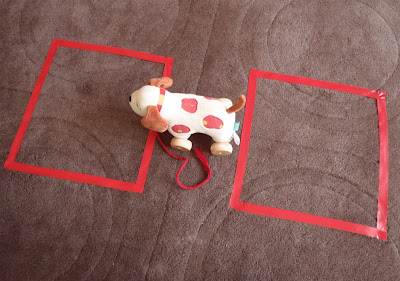 Using electrical tape we made two squares on our rug with space in between for our chosen toy. 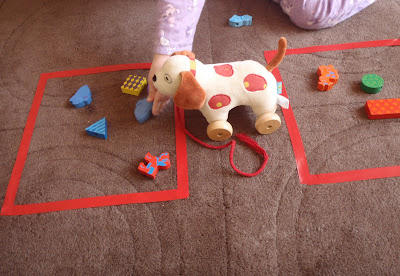 I then gave Bubble verbal instructions one by one about where to put each of the sorting items (in the front or back). I encouraged her to verbalise as she placed each one.
We used wooden threading beads as our objects so I could add in some incidental learning.
For example instead of "put this in the front" I could say "put the blue dog in the front". It also gave us more to work with later when we did the game expressively. 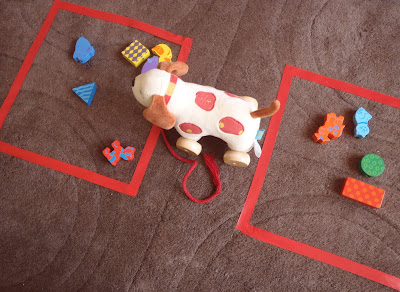 If your child is finding the concept you are teaching a bit tricky you could use different coloured tape for each square to make the difference in position more visual, then change to the same coloured tape once they have the hang of it.

TO PLAY THIS GAME RECEPTIVELY:
Give your child the sorting pieces and verbal instructions (you could use paper and markers to make visual cues in the form of written words or pictures if these would help).
For example "put the orange cow at the back", "put the yellow duck at the front".
Encourage your child to verbalise what they are doing if they want to, but don't force it.
Alternate between front and back randomly so your child cannot establish a predictable pattern.

TO PLAY THIS GAME EXPRESSIVELY: