I saw this idea for Jumping Cups on typepad, thought it was genius and had to give it a go! I wanted something a bit more Bubble proof than paper though (she can be a bit enthusiastic with her toys :-D) so made the rocket part out of felt instead. I copied their rocket shape as closely as I could because I thought it was just so cute, and then attached it to a band of felt that I then stitched into a cuff to fit over the cup. Their instructions were so easy to follow and it was a matter of minutes to assemble the cup part of the project. It took a few practices but bubble eventually mastered the art of launching her rocket - it's been a hit all week! 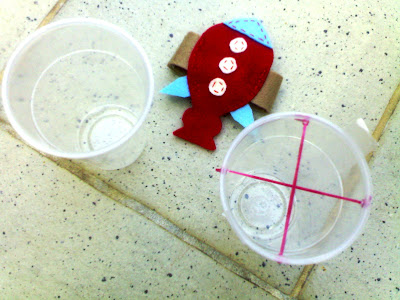 Two plastic drinking cups, punch four holes in the top of one cup and tiw cut elastic bands through the holes to form a cross. Make sure the knots are secure enough not to come back through the holes when pulled hard. 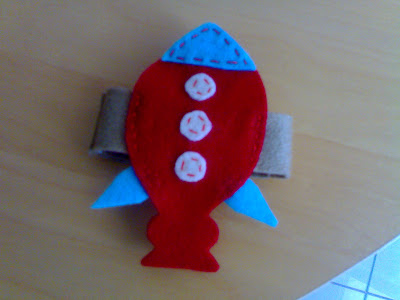 Rocket cuff: I just free drew the rocket shape using the photo as a guide (you could use anything really; a toy, any photo or picture or just your imagination) traced it onto the felt and sewed it all together. The cuff is just a strip of felt sewn to the circumference dimensions of the plastic cup. 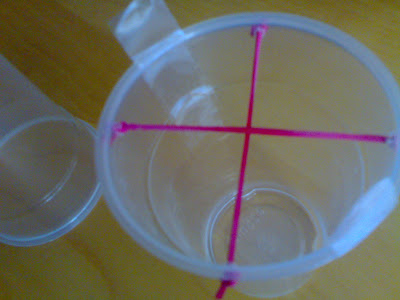 Make two tabs on either side of the cup with the bands by doubling over tape. You will be using these tabs to pull down your jumping cup so make them secure. 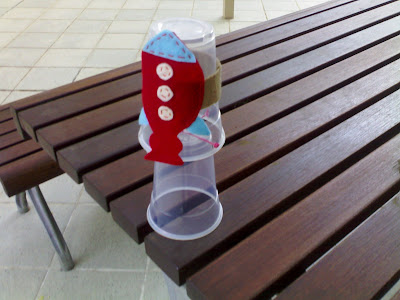 Upturn the untouched plastic cup and place the other cup on top bands down. 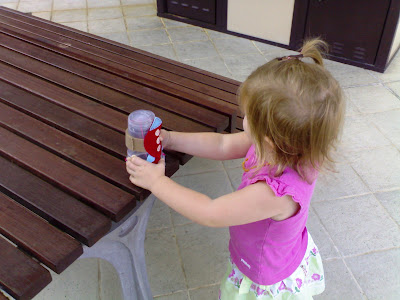 Pull down the top cup using the tabs and then let it go to launch it into the air! Bubble found the tabs hard to grip so she perfected launching the rocket by holding the cup in her hands instead.
Posted by Caz at 3:44 AM